Kirby Wilson: A Story of Recovery 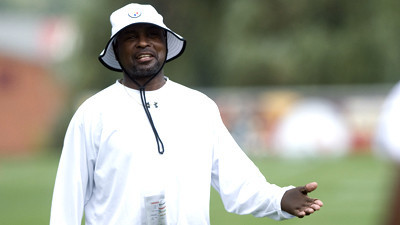 Kirby Wilson has faced tragedy, but is hasn't stopped him from continuing his passion. Read about how the new Vikings running back coach has defied odds.


On January 6th of 2012, new Vikings running backs coach Kirby Wilson's life changed forever. At 2:30 a.m. a fire inside his Pennsylvania home destroyed his condominium and the sleeping Wilson, suffered second and third degree burns on his arms and legs. A neighbor pounded on the door as the fire blazed and found Wilson with burns that covered nearly 45 percent of his body. As fire crews arrived, the house was deemed a total loss and Wilson was airlifted to a burn unit where he was placed in a medically induced coma for weeks. All of this happened just 48 hours before the Steelers prepared for an AFC Wild Card matchup with the Broncos. The players rallied around the well-respected running backs coach. Pittsburgh lost the game 29-23 to the Denver Broncos, but immediately following the heart breaking loss, the players wanted to be sure Kirby was in good hands.

"He is always the first guy in the building, He's always here. He takes pride in his running backs. It's sad to see this happening," Steelers running back Issac Redman told WPXI news following the accident.

Wilson was stabilized by the start of February and he began his long road of physical rehabilitation that extended for months. This story is chronicled in an interview ESPN reporter Josina Anderson conducted during Steelers training camp.  Kirby Wilson defied odds and proved to many how to handle a serious situation and find hope when times are bleak. Just seven months removed from suffering serious burns in the fire, Kirby Wilson jogged unto the practice field for the Steelers first training camp practice in July of 2012. The veteran coach was on the field yapping at his players and running from drill to drill on the first official day of practice.

"You don't know how much it means to us. For us players who know and have a relationship with him, it truly is special. To see him walking around and kind of getting a little jog in almost brought a tear to my eye," Ben Roethlisberger told ESPN.com.

Wilson, who has also coached running backs for the New England Patriots, Washington Redskins, Tampa Bay Buccaneers, Arizona Cardinals, and the Pittsburgh Steelers has developed a pedigree in his 26 years of coaching. Players have found solace in hi coaching abilities and the most recent expansion of rookie Le'Veon Bell's abilities prove his skills are top-notch.

In Wilson’s 16 NFL seasons as a running backs coach, he has coached four of the top 25-rushers in NFL history (Emmit Smith, Curtis Martin, Edgerrin James, and Thomas Jones).

Wilson’s resume is impressive; maybe he should be nicknamed the “running-back-whisperer.” explained a Steeler's fan website.

Kirby Wilson most recently was one of four candidates for the Ravens offensive coordinator opening that eventually was awarded to former Houston Texans head coach Gary Kubiak. Wilson has been yearning for a coordinating job in the league and he is searching for a platform to do so. With Adrian Peterson and a talented set of running backs in Minnesota, Wilson could expand his resume enough to be considered for a coordinating job in the future. If Norv Turner has an astounding season as a coordinator, Turner could find himself in contention as a head coach and Wilson could potentially become the offenisve coordinator here.

Kirby Wilson has defied odds in every stop of his career and overcame tragedy, while returning stronger than before. With plenty of pieces in Minnesota, including one of the best running back's in the game, a developmental piece in Bradley Randle, and power running back Matt Asiata in the fold, Wilson has a talented group of running backs to collaborate with in Minnesota. His coaching abilities, combated with his determination will add a satisfying flair to the Mike Zimmer's coaching staff when training camp begins in July.