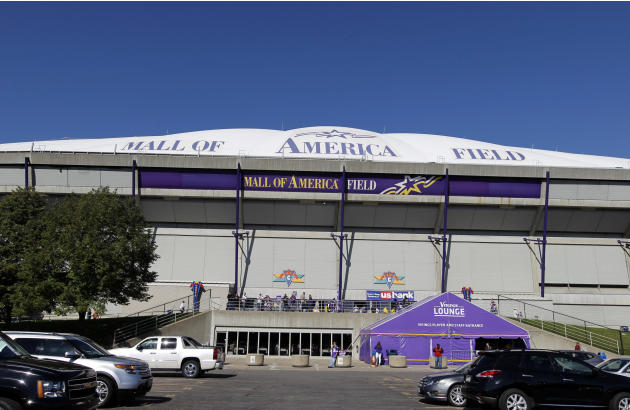 The Vikings will close the Metrodome after 32 seasons in the building and will look to hand the Lions a loss, to end the season with a slightly positive vibe. Daniel House has corralled all the stats and analysis needed for the Vikings to win, in his latest post.

The Vikings are looking to rebound after a demoralizing 42-14 loss to the Cincinnati Bengals last week. The Vikings offense struggled to move the ball and after three turnovers, the team was plagued in many facets of the contest. The defense couldn't stop the brilliant tandem of A.J. Green and Andy Dalton, who scorched the team's secondary on a frequent basis. This week, the Vikings will look to close out their home of 32 years, Mall of America Field. The Lions were eliminated last week after a last second field goal by the New York Giants killed their playoff hopes, they have little to play for this week. Detroit controlled their own destiny until losing four of their last five games as the season wound down. After 32 seasons of memories, heartbreak, and moments we will never forget, the Metrodome will see its final sports contest tomorrow as the Vikings take on the Lions. The Vikings have beaten the Lions more than any other opponent in Mall of America Field history holding a 23-7 record against Detroit since the building opened in 1982. With a 4-10-1 record, the Vikings have little to play for, but as they close out a venue that has a storied past, they will look to leave the building with the best possible memory. How do the Vikings attack a very talented Lions team and close Mall of America Field on a positive note?

Last week, Matt Cassel turned the ball over three times, which led to the Vikings offensive struggles against the Bengals last week. The running game failed to develop and the Vikings offense was as anemic as it had been prior to the Eagles game the week before. Cordarrelle Patterson was the only glimmer of hope for the Vikings in last week's game as he rushed for a 33-yard touchdown in the fourth quarter. The Vikings need to find ways to get the ball in Patterson's hands as they look to topple the Lions front-seven. With Ndamukong Suh and Nick Fairley in the interior of the Lions defense, their pass rush has been one of the best in the league this season. Detroit's secondary on the other hand, has been a different story. They have allowed a sixth-most 3,779 passing yards this season, which has led to their collapse down the stretch. The Vikings will need to attack the Lions passing game with intermediate routes and extend the field well. Matt Cassel will need adequate time to move in the pocket and if he is pressured the Vikings will struggle to compete with the Lions. The Vikings offense will be without running backs Adrian Peterson and Toby Gerhart, but this proved to make the Minnesota offense less one-dimensional in week 15, as the Vikings knocked off a surging Eagles team, 48-30. If the passing game is established, the Minnesota offense will move the ball and open lanes for Matt Asiata to run through.

The Vikings defense could make history tomorrow and not the type they were looking to make this season. If the team allows 17 points or more against the Lions, they will have allowed the most points in the history of Vikings defenses. Matthew Stafford traditionally throws for an ample amount of yards, but he could be without his most important target in tomorrow's game, Calvin Johnson. The Lions will look to put the ball in the hands of dynamic playmaker Reggie Bush, who destroyed the Vikings in the passing game during a week one loss at Ford Field. Audie Cole was ruled out for the season this week with a high ankle sprain, which means Erin Henderson will see work in the middle of the defense again. Furthermore, Michael Mauti took more snaps at middle linebacker this week and is expected to rotate frequently with Henderson this week. The Lions will look to exploit Chris Cook as the weakness of the secondary, much like Andy Dalton did with A.J. Green last week. If Calvin Johnson plays, his number will be called frequently and given the struggles the Minnesota secondary has faced, he could put up a monstrous amount of yards this week. If the Vikings can't pressure Matthew Stafford and he is allowed adequate time to find his receivers, the Minnesota secondary simply cannot handle the load of passing yards that will be thrown at them.

If the Lions decide to kick the football to Cordarrelle Patterson, he will be hungry to corral his third kick return touchdown of the season, which would be a Minnesota Viking team record. On another note, the Vikings coverage team will need to corral punt returner Jeremy Ross who already has one punt return touchdown this season and has posed headaches for opposing coverage teams this season.


The Vikings are very banged up and will be without Adrian Peterson and Toby Gerhart, along with the chance guard Charlie Johnson will miss the game for personal reasons. On the defensive side of the ball, Audie Cole was placed on IR yesterday, Letroy Guion has been ruled doubtful, but cornerback Xavier Rhodes may return this week after a sprained ankle he suffered three weeks ago.

The Lions already week secondary is very depleted and could be without Chris Houston and Dwight Bentley, which bodes well for the Vikings passing attack.

Protecting Matt Cassel, avoiding turnovers, creating a pass rush, stopping a pass-happy Lions offense, and corralling the Lions punt return game will all be necessities if the Vikings want to close Mall of America Field with a win tomorrow.