Daniel House analyzes how the Vikings won on Thursday Night Football and what has changed for this group. He discusses all of this and more in his latest game review.


The atmosphere on Thursday night was amazing and given the circumstances surrounding this football team, I was very encouraged. The perseverance from this group of people has been absolutely incredible and is a testament to the players who are on this team. With a 1-7 record entering the game on Thursday, along with a short week, this team had the odds stacked against them from the start. The Vikings only suited up 44 players after injuries riddled the roster the week before. The depth was thin and the coaching staff suited up just six defensive lineman for a game with a Redskins team which runs the read-option scheme. This put a strain on many areas of the Vikings game plan, but this team didn't let it bother them.

One of the huge bright spots was the play of 11-year veteran Kevin Williams, who lined up at the nose tackle position; a place where he has witnessed little playing time in his career. The new arrangement worked smoothly and Williams registered 2.5 sacks, his first multi-sack game since 2009, and he was just as crucial in defending the running game. While much of Williams' impact in Thursday night’s game won’t show up in the stat sheet, he was causing brilliant interior pressure on several occasions this week. Could Kevin Williams permanently play inside following his success on Thursday? Doing so could extend his career by several years, offer more experience to Sharrif Floyd at the three-technique, and bring the interior pressure we have been missing throughout the first half of the season. The image below illustrates the type of interior pressure Williams applied in both running and potential play action situations.

Williams recorded his first sack since week ten of last season and he finished with his best Pro Football Focus grade (+4.1) since week 12 of the 2010 season. One sack may have been janitorial style work, but the other sacks came after manhandling Redskins offensive lineman Will Montgomery and Chris Chester. When Coach Frazier was asked about the prospects of moving Williams, he said it needed to be be discussed internally.

"He's not a big fan of playing the nose tackle position," Leslie Frazier said Friday about Williams. "We haven't talked about it of late. It just came up by necessity this time around."

The next day, Williams discussed the beating he took and how difficult it was to wake up on Friday morning after playing a season-high 63 snaps. He smiled and said he understood why former Vikings nose tackle Pat Williams never played without his elbow pads.

John Carlson emphatically stepped up in his first opportunity to start in the absence of Vikings tight end Kyle Rudolph. Carlson corralled 98 yards, while executing on all seven of his pass catching opportunities on Thursday. Carlson participated well in the run blocking scheme of the equation and was wide open on several occasions after the Redskins offense catastrophically collapsed on play-action passes. He was also brilliant at moving the chains and hauled in first down grabs on four of his seven receptions. Carlson sealed the edges for Adrian Peterson on several runs and finally produced for the first time since his rookie season with the Seattle Seahawks. He was thrilled to see an extended role, but stressed he missed his counterpart, Kyle Rudolph.

"Yeah, I’m excited it was fun to be involved, but obviously we miss Kyle (Rudolph). Kyle’s a beast and we want him out there on the field. It was fun to be out there on offense and hopefully that can continue, but we want Kyle back as soon as possible," Carlson concluded.

Carlson's role should continue to evolve over the coming weeks, which in turn should help develop his passing catching skills for the 2014 season.

Andrew Sendejo led the Vikings defense with eight stops and was very good at laying hits on RG3 and the Redskins running backs. He has been a huge asset in the absence of hard hitting safety Harrison Smith, who has missed time with turf toe. Sendejo has a fearless edge and is very good in run support in the box, especially when the safeties are aligned closer in the box during running situations. He has helped his case as he looks to potentially emerge into a starter for this team next season. He needs to develop more instincts in the passing game, but his ability to lay hits and defend moderately well in the back end, has been a quiet surprise within a defense full of problems.

A Makeshift O-Line Handles the Load 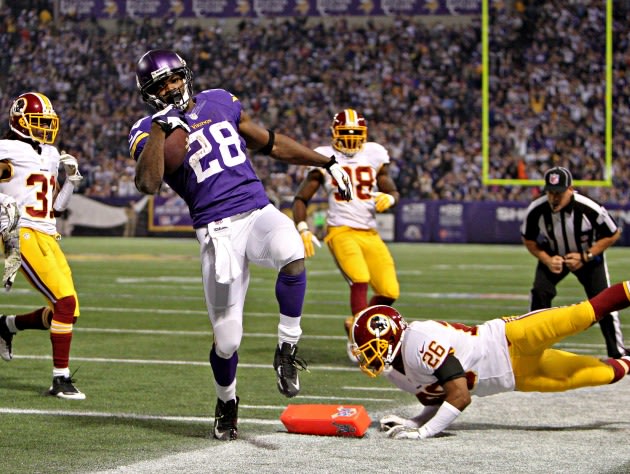 The Vikings entered Thursday without right tackle Phil Loadholt and left guard Charlie Johnson, but this didn't effect the unit's performance in prime time. Offseason acquisition JaMarcus Webb filled in nicely for Loadholt and in fact, played better in some aspects. Joe Berger shifted to left guard and played rather well, but his run blocking left something to be desired. It was remarkable Christian Ponder faced pressure on just seven drop backs, which proves the strides this group made in week ten. They deserve some of the credit for protecting Christian Ponder and opening lanes for Adrian Peterson, which were pivotal keys to the win versus the Redskins.

Can Christian Ponder just develop into a mediocre or above average quarterback at some point? Consistency has been the problem and Ponder showed what he is capable of doing in this league on Thursday night. After a shaky beginning and abysmal hurl to Greg Jennings to start the game, Ponder settled nicely and played very well until suffering a shoulder injury late in the third quarter. Ponder showed more ability to throw the ball outside the numbers and connected on five of six intermediate passes for 98 yards and a touchdown. This performance won't save Ponder's job, but certainly is a resume builder for him to use in the future. Ponder finished with the highest QBR of his career (90.0) and completed 81% of his passes, which has been a customary struggle for the passive gunslinger. Ponder faced pressure on seven drop-backs going 6-for-6 for 76 yards with a sack, displaying an improved pocket presence.

"I am proud of the way we played. We fought to the very end. There were so many times, especially on that last drive, when guys could have bought in that something was going to happen, that we were going to lose this game, but we didn’t," Ponder stated. "There was a point in time when we were down by 13 points, but third quarter, we kept battling back. We only dressed 44 guys. That’s great; the way we fought at home was awesome. We needed this win," Ponder concluded.

For the first time this season, Ponder led this team as well as he did during the final four games of the 2012 season. He made throws necessary to win and didn't try to do too much in the process. Ponder isn't an elite quarterback because of his unproven consistency and barring an amazing finish to 2013, it seems very likely the team will be drafting a brand new franchise quarterback in May.

As I briefly discussed, Christian Ponder suffered a dislocated shoulder as he dove for a touchdown late in the game on Thursday night. Further evaluations and MRI's proved the injury to involve a pure dislocation and his status will be evaluated on Wednesday. 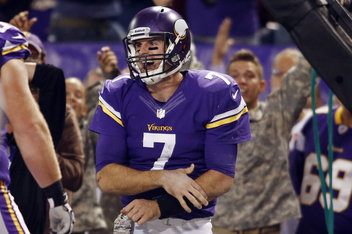 When Ponder was asked about the severity of the injury, he wasn't quite sure how the shoulder would develop of the coming days.

"I got hit hard on the right side, and I think that the impact against the ground caused it (his shoulder) to come out of place. He hit me pretty hard, but he got out of the game too, so that’s good to hear," Ponder explained.

If Ponder isn't ready to play against Seattle next Sunday, all signs point to Matt Cassel getting the start at CenturyLink Field. If any tissue was damaged during the hit, Ponder could miss time, but this won't become clear until he is evaluated during the middle of next week.

This Team has Heart

I will never question the heart and drive of this team and considering the circumstances entering the game on Thursday, the players could have thrown in the towels. They didn't and played as hard as possible, en route to corralling their first win in America. As many people have been emailing me over the past few days, they have expressed their displeasure with the Vikings winning effort on Thursday. As many fans look towards the NFL draft, they feel this win could eliminate the Vikings from selecting the quarterback for the future. (See the Reality Check below)

Reality Check: It's November in the NFL and we are months away from drafting a quarterback as the evaluation process has hardly begun. Players on this team don't quit for the thought of the team drafting an unproven rookie who could flop as fast as he walks in the facility. I understand the consensus is the Vikings will draft a quarterback, but defense could be a priority in the equation. The point is clear, it is too early to worry about the draft and who we will select in May. This will all fall into place on its own and as the draft approaches trades and other avenues may need to be exercised as the team makes the dream of drafting a stud quarterback a reality. In the NFL Draft, it doesn't matter as much about where you pick, but how you utilize the picks you awarded. Just a reminder Aaron Rodgers was drafted with the #24 overall pick and he turned out to be well - average. This being said, you have the same probability to draft JaMarcus Russell or Brady Quinn no matter where you select in the draft. All I'm trying to express, is remain calm and the draft will take care of itself. This team could have plenty of new faces making this decision, which frankly, makes the drafting position a mirage.