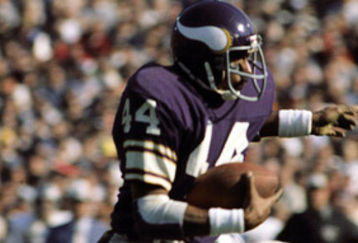 Tomorrow the Vikings report to training camp and Daniel House pours his heart into a post honoring the person who influenced his writing career the most.


Tomorrow our favorite football team embarks on a new campaign, as they report to Minnesota State University-Mankato for training camp. Vikings football is more than just a game to me, it brings forth memories about how the team was passed down through my family.

My grandpa was the man who started this all and deserves the praise for developing the football knowledge and understanding I have today. He is one of the reasons why this site was so successful and today I dedicate this post to him, on the year anniversary of his passing.

In 1961, the Vikings were incepted into the NFL and began the quest to develop the sports market in the Twin Cities area. It brought a whole new energy to the area and gave the community their first shot at professional football. My grandpa quickly became a fan of the organization and never looked back over the next 50 years of his life. My dad was born a year later and was brought into the sacred group of Vikings supporters. As my dad grew older, my grandpa began to share the moments with him and they became the analysts of each and every game. My grandpa raised a farm in central Minnesota and lived on 200 acres of land in central Minnesota in 1976 and lived there during his lifetime. He farmed the land over the years, raising corn, beans and alfalfa. No matter the circumstances on the farm or the chores and tasks that needed to be accomplished, life stopped for 3 hours every Sunday during Vikings games.

I entered the world and my grandpa was the man who I turned towards to talk about the Vikings and anything that was happening in sports. If I called him at midnight, the middle of the day, or early in the morning, I know he would have chatted with me. He always had a story about a game from the 70's or 80's and always talked about his favorite player Chuck Foreman. He explained his ability to spin away from "would-be" tacklers. He stated that the only Viking he ever saw with as much athletic ability as Foreman, is current running back Adrian Peterson. My grandfather and father recalled his rookie season, where Foreman was named the AP Offensive Rookie of the Year. They both talked about his ability not only to run the ball, but to catch passes out of the backfield. He actually caught 6 touchdowns through the air compared to four on the ground. When I was little kid, I got him an autographed picture of Chuck Foreman. When he opened the gift, he beamed one of the biggest smiles I ever saw from him; Foreman was his idol.

The other story repeated frequently by him was a historic game played on December 30th, 1980, the Vikings trailed Cleveland by a point, 23-22, and Tommy Kramer had just launched a pass from the Browns’ 46-yard line into the right corner of the end zone, with four seconds showing on the clock. Terry LeCount, Ahmad Rashad and Sammy White had been moved to the right corner, LeCount in the middle as if it had been a wing formation. The clock ticked down to zero with the ball in flight. The Vikings faithful (including my grandpa) held their breath as a Central Divison championship hinged on a miracle. Rashad caught the ball, backed into the endzone and brought Vikings fans an improbable Central Divison Championship. The only other game more memorable to him was in 2009, when Brett Favre completed a hail-mary to Greg Lewis who caught the pass in the back of the endzone to win the game, in heroic fashion.

My grandpa loved Brett Favre and the entire 2009 roster, which came so close to hoisting the Lombardi Trophy. I remember the heart break he felt for months after that game and the energy he expressed during the night of January 24th of 2010, when the Vikings came so close to reaching the Super Bowl. He experienced heart break more than once, including the 1998 championship game, in which the 15-1 team, lost in a terrible fashion in overtime. The true fan my grandpa was, he never quit on this team, even when he wanted to fire Brad Childress or throw his foam brick at the TV, he always kept his passion for the team. When times get tough with my favorite football team, I remember the true fan my grandpa and dad have been and that at some point, we will reach football immortality.

During the last year of my grandpa's life, I developed an even stronger bond with him after a diagnosis that changed his life. In January of 2012, he was diagnosed with Myelodysplastic Syndrome or MDS, which is a form of leukemia. For six months we spent countless hours at the hospital and at his frequent appointments for the illness. He started several forms of treatment, which brought forth zero results. He then began chemotherapy and spent nearly two months in the hospital, but finally witnessed results and was released on March 23rd, which was his 80th birthday. After several months of cherished time, he went for his routine checkup and found that his white blood cell count was abnormally high. He was admitted to the hospital once again and spent an extended amount of time in the hospital again. After more treatment, his cell count wouldn't improve, but he was sent home and transferred to and from the hospital for additional medical procedures. After a week at home, he was admitted to the hospital again with a lung condition called ARDS, which caused his breathing to become restricted causing more issues for his health.

The health problems were an uphill battle and my family including my grandma, who was married to him for 51 years, were spending as much time with him as possible. I remember sitting in the hospital two days before his passing and seeing a blanket that the church minister had brought for him. He asked him which color blanket he wanted and with no pause, he immediately called for the purple one. I had left for a few moments and returned to the room to see the blanket.

He pulled up from his bed and pointed, "See that blanket there, why did I pick that one?"

I responded, "It's purple!"

At that moment, I knew the impact the Vikings had upon my grandpa's life and how much he loved the team. Out of curiosity, I asked him who his all-time favorite Vikings was and without any hesitation, he responded with Chuck Foreman.

I had just started Vikings Corner at the time, he was so proud of the accomplishment and read the posts I would print and bring to the hospital. He told me he had no doubt I would reach my dream to cover the Vikings for a career. He knew the passion I had developed for the team and the drive I had to make this a reality. I cherished this as one of the final conversations I had with my grandpa and his words have stuck in my head since that day on July 23rd. The next morning, he was taken from us, but his presence lives on each and every day.

In the past year, I have taken the strides necessary to make my dream happen and will be covering the Vikings from the sidelines on August 2nd and 3rd; a feat I know my grandpa would be proud of. Every post I write, I put as much heart and dedication into as my grandpa did in his support of the team.

The 2013 season marks the start of a quest towards the Super Bowl, something that never happened in my grandpa's lifetime. He wanted to witness this happen more than anyone could have wanted. When this occurs, he will be one of the people I will be celebrating with when the clock strikes zero and the Vikings hoist the trophy.

As the Vikings check-in tomorrow, I would like you to think about someone who has impacted your support for the team. I know my Grandpa has played a huge role for me and will continue to do so.

One thing is certain, I will do all I can to reach my dream to write professionally in the NFL market, in honor of my idol and hero.
Posted by Daniel House at 6:33 AM