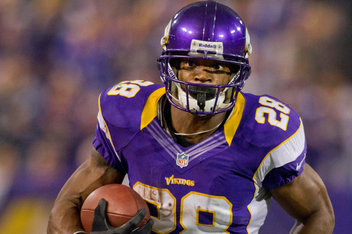 Today marks ten days until the Vikings hit the practice field for training camp on the campus of Minnesota State University-Mankato. With that, we divulge 10 proverbial talkers as the Vikings hit the steamy Mankato air on July 25th. Which question is most important? Daniel House tells you in his latest post.

In 2013, the Vikings are looking to build upon a successful 2012 campaign, which resulted in a playoff berth and a six game improvement in the win column. Which areas need evaluation and will lead to a debate among elite football minds?

#10- Will Jeff Locke sufficiently punt the ball inside the twenty yard line?

#9- Will Xavier Rhodes transition to the NFL, or will he struggle in his rookie season?

#8- Can the coaching staff mold Cordarrelle Patterson into an elite vertical wide receiver?

#7- Will there be more offensive balance in 2013, or will Adrian Peterson have another heavy load?

#6- Will John Carlson return to normal form in his second season in purple?

#5- Who will emerge as 5th wide receiver for the Vikings? Adam Thielen, Joe Webb, or Greg Childs?

#3- How will Jared Allen perform during a contract year? Can he return to elite form?

#2- Who will emerge as Harrison Smith's counterpart in the backend of the defense?

#1- Can Christian Ponder take the next step as a quarterback and lead this team to football immortality?

Let these questions marinate in your mind and I will answer with my thoughts before training camp begins next Thursday.

Stay tuned for continued analysis and more details regarding our coverage at Vikings training camp.
Posted by Daniel House at 10:38 AM