Daniel House takes a look at the entire quarterback depth chart and gives his thoughts on the position before training camp begins in July.

The quarterback position has been an area of concern for Vikings fans since Daunte Culpepper's career ended in 2005. Tarvaris Jackson to Kelly Holcomb, to Brooks Bollinger, to Gus Frerotte, to Brett Favre, to Joe Webb, to Donovan McNabb, and finally Christian Ponder. The Vikings haven't had a young premier quarterback since the days of Joe Kapp and Fran Tarkenton. The hope is Christian Ponder will mold into an elite NFL quarterback, but as we evaluate his job over the past three seasons, it is a slow process. To become elite, quarterbacks need time to develop. Ponder didn't have the luxury to practice with the likes of Brett Favre for three seasons like Aaron Rodgers in Green Bay. He is young and the rookie mistakes are expected in the freshman, sophomore, and junior seasons in the league. Now we hit the 4th year and results are going to be expected. Ponder played a key role in the Vikings trip to the playoffs last season, but most of that run was due to Adrian Peterson's amazing year. Christian made throws in the short and intermediate fashion, but struggled to stretch the field vertically. We can't blame Ponder entirely for the struggles to play teams from a vertical aspect. His cast of receivers was less than impressive and with star receiver Percy Harvin missing half the season, he lost his threats. With the addition of Greg Jennings in the offseason, the hope is that Ponder will finally have a vertical target to stretch the field and keep the defense honest. Not only will that lead to Ponder's success, but it will open alleys for Adrian Peterson to do what he does best.

Below are Christian Ponder's statistics from the 2011 and 2012 season: (via ESPN)

From the analysis of these statistics, we see the rise in production, but Ponder played in 5 less games in 2011. He had double the amount of completions, attempts, yardage and improved upon his completion percentage. This was partly due to the nature of his passing being in the short and intermediate range. His long pass of the season was a 65 yard touchdown and he struggled at times when he was placed in situations where he had his arm strength tested. Ponder needs work on arm strength, which was definitely an issue coming out of college at Florida State. When watching practices, you could see the sheer amount of balls left short or long, or just completely overthrown. Coach Frazier indicated at the end of last season that he was looking for an improvement in arm strength and wants Christian to feel comfortable to throw to any spot on the field.

Let's take a look at the production with quarterback ratings from last season in a game-by-game format.


Now take a look at the wins and losses and how his play effected the loss column You can see the consistency in the first few weeks of the season, but you will see in weeks 7-13, a significant drop in production, which resulted in Vikings losses. Ponder passed for 58 yards in Week 7, but the Vikings managed to defeat the Cardinals 21-14. In Week 9, he threw for 63 yards against Seattle, which resulted in a 30-20 loss. He improved statistically at the end of the season and was pivotal in a 4th quarter win over Green Bay, connecting with Michael Jenkins to put the Vikings into field goal range for Blair Walsh to kick them to the Wild Card Round of the playoffs. The Vikings reached the playoffs, but Ponder suffered a brutal elbow bruise, which caused him to miss the playoff game. Joe Webb started and struggled, causing the Vikings to lose to Green Bay 24-10 in the Wild Card round.

How short is Ponder's leash and how must he play in 2013? The answer is clear and will be the deciding factor of Ponder's career. If Ponder struggles at any point during the 2013 season and is effecting the outcome of the first few weeks of the season, look for Matt Cassel to be placed in the starting role after the game vs. the Steelers in London.

We must look at how the Vikings are positioned if Ponder struggles during the 2013-14 season. They have an extra third round draft pick from the Percy Harvin trade and could move up in the draft to select a franchise quarterback in 2014. Time will tell, but based upon statistical analysis and the current product on the field, things will need to go perfect for Ponder this year. I hope it does because I think he has the IQ and football knowledge to be successful in this league. We have to remember that this is a business and with the "pass-happy" conversion of the NFL, you need a quarterback to compete.

I discussed Matt Cassel earlier and believe that the Vikings solidified one of their weakness heading into the 2013 season. When Ponder went down in the playoffs, we didn't have a reliable quarterback to fall back to. Cassel has had experience in the league and has had extended success at moments of his career.

From a statistical standpoint he stacks up similarly to Ponder in the early end of his career.

He received his first extended appearance in the absence of Tom Brady in 2008. His numbers were solid and his QB rating average was over 80, which is a good target for a quarterback in the league. The mind boggling stat is in 2010, where Cassel recorded his highest average QB rating and nearly had his best statstical season ever. You can certainly see the decline in the Chiefs from 2011 to 2012.They lost key leadership and pieces on the offensive line. Cassel wasn't able to successfully be productive in a market that hasn't had success in multiple seasons. Now he enters a system where there are more pieces in place and where he feels comfortable in the offense. He is a trusted veteran in the league and could fill Ponder's shoes in two instances. One instance being a disappointing start and another being an injury that alters the complexion of the position. One thing is for sure, if Ponder is injured, we can be assured that we will have a better chance to win than with Joe Webb at the helm.

Next comes McLeod Bethel-Thompson, a player that has seen limited action and snuck on the roster last season. A Sacramento State star and former 49er and Dolphin, Thompson has jumped to rosters in 2 seasons in the league. With an extended stay in the CFL with San Jose, it took him several years to find his first NFL team in San Francisco. Finally, he found a team like the Vikings where he could settle and learn a scheme to develop. Bethel-Thompson has great arm-strength and was impressive at stretching the field in training camp practices last summer. He has potential and could be developed into a starter in the next few years. The Vikings brought in Iowa rookie James Vandenberg to compete with Bethel-Thompson this summer. This is intriguing and could be more of a battle than some thing.

Here is a look at Bethel-Thompson's top season at Sacramento State from a statistical standpoint.

Let's compare this to James Vandenberg, who saw much much more college experience in a "pass-happy" offense. 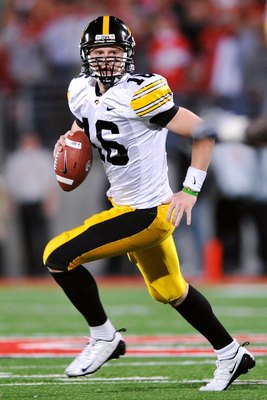 The statistic that stands out to me is amount of passes he threw in his junior season and the elevation we saw from 2010 to 2011. Compare that to Thompson and his "less than stellar" college stats and it makes competition seem possible.

"This native Iowan, who set many state high school passing records, patiently waited for Ricky Stanzi to graduate before getting the keys to the Hawkeyes’ offense. He didn’t set the college football world on fire with his play as a first-year starter in 2011 (58.7 completion percentage, 3,022 yards, 25 TD, seven INT) and struggled mightily as a senior (57.3 completion percentage, 2,249 yards, seven touchdowns, eight interceptions). Still, Vandenberg has shown the ability to be a rhythm passer who will likely be brought into camp as an undrafted free agent for a team that runs a more up-tempo type of offense."

The worry is the decline in production from 2011 to 2012, but injury problems caused Vandenberg to be slowed. We will have to see the way he responds to the pressures of the NFL and if he is ready to be a quarterback in this league.

With Bethel-Thompson's experience in the league and his proven ability in the NFL, Vandenberg could simply be a mirage for the Vikings. It is certainly a storyline that Iowa Viking fans will be watching closely during training camp and the preseason.

Overall, the quarterback position is more solidified than last season, but with a log-jam at the top and the potential for Ponder to struggle, there are many unanswered questions. The hope is for success to surround our favorite team and with consistent play at this position, don't be surprised if the Vikings can improve upon their 10-6 record.

The keys are in the quarterback's hands and we will just have to see how Ponder responds entering week 1, because this year there are no excuses.