Daniel House analyzes the running back position and the stability we see in the group of players at this positional group. 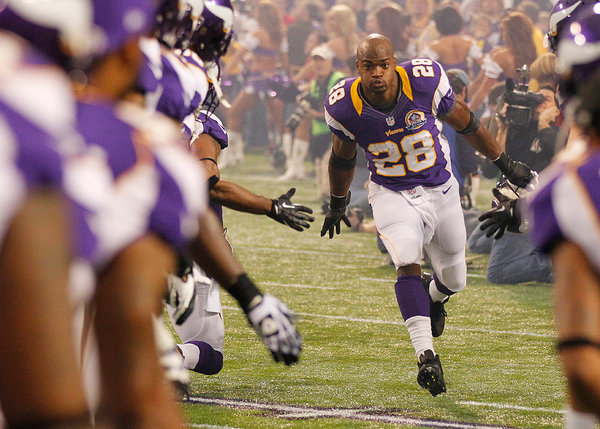 Last season we witnessed one of the greatest performances in Minnesota Vikings history. No one  believed Adrian Peterson would rush for 2,097 yards and fall just 9 yards short of Eric Dickerson's rushing record. All of this just months removed from a debilitating knee injury. It proves that Peterson is one of the greatest running backs to ever suit up in the NFL. How can we deny this based upon statistics and his ability to single-handedly take over a game? In seven years, we have realized the special player that we are watching. All of us will look back 25 years from now and remember the moments we witnessed from the greatest player in Minnesota Vikings history.

Think about those who passed on Peterson in the 2007 draft because of the broken collarbone he suffered during his senior season at Oklahoma. Imagine if another team would have selected Peterson ahead of the Vikings or if we decided to draft Brady Quinn with the 7th pick.

The following were the players selected ahead of Peterson in the 2007 NFL Draft:

The only players making impacts in the league are Calvin Johnson, Joe Thomas, and Peterson. The rest have fallen off the NFL surface and didn't hold up to the value they were selected at.

Vikings fans should be thankful that the draft went the way it did and that they were able to draft the greatest player in franchise history without holding the number one pick in the draft.

Peterson has grown since his rookie season, which brought with it Rookie of the Year honors. From his statistical breakdown we can see the growth between his rookie and sophomore season's in the league.

It seemed that Peterson was used the most he ever has during the 2012 season, but he actually received more carries during his second season in 2008. In those elevated situations, Peterson has recorded his highest amount of yardage. In the 2009 and 2010 seasons, his load was eased when Brett Favre joined the roster and passing was more prevalent. In 2011, he suffered the ACL tear, which caused him to miss several games at the end of the 2011 season. Ultimately from a statistical standpoint, we haven't seen a decline, but more of a gradual improvement.

Many are waiting for the proverbial running back decline, which generally comes after 5 or  6 seasons in the league. With Adrian Peterson, he won't accept anything less than success. He will improve before he regresses and has a legitimate chance to rush for more yards this season. He has publicly made his goal for 2,500 yards, shattering Eric Dickerson's rushing record. Many analysts believe it is impossible and that Peterson will never do something no other player has accomplished in NFL history. How can we as media members doubt Peterson and the things he has accomplished in seven seasons in the league? We are witnessing greatness and cannot deny that there is a probable chance that Peterson could break Eric Dickerson's rushing record in 2013. As a team the Vikings want success and have made it clear Peterson is a team player and isn't worried about personal accolades. With victories come personal accomplishments and ultimately Peterson wants to win football games and eventually hoist the Lombardi Trophy; something that hasn't happened in the history of the franchise.

One thing is for sure, Adrian Peterson will give it everything he has on every Sunday he straps on the pads. That's why "All-Day" is arguably one of the best to ever play the game and easily the best player in the organization's history.

Obviously Peterson eats up many carries and the Viking's current backup hasn't seen his fair share of carries in his third season with the team. Gerhart filled in nicely for Peterson during his absence at the end of the 2011 season. Gerhart has expressed his displeasure about not getting many carries, but he understands he is playing behind an MVP running back in Peterson. He is in the final year of his contract in Minnesota and has indicated he will be searching for a new job where he is a featured running back. Gerhart (26), a 2010 2nd round draft pick has been a reliable third down back for the Vikings and is a great pass-catcher out of the backfield.

From a statistical standpoint, Gerhart hasn't accumulated many carries in three seasons with the team.

As discussed, you can see the rise in attempts in 2011, but the decline in 2012, in a career low amount of carries.

This is overshadowed when you see the stat line from the receiving area.

He averages about 28 catches per season and has accumulated nice yardage through screens and other flanker type formations. Gerhart is very "sure-handed" in the pass game and has proven himself as a reliable player in blitz pickups. He certainly isn't the prototypical speed running back, but he provides a unique power running style, especially in goal line situations. I could see Toby Gerhart developing into a LeGarrette Blount style running back, with more repetitions at the position.
Matt Asiata appeared in every game last season, but mostly on special teams. He's a versatile third running back with zone-running traits but not a change of pace. He is primarily found in between the tackles and solidified himself as a power back during the preseason, winning a roster battle against the speedy Jordan Todman. Asiata has seen his time as an H-Back and has the flexibility to play fullback in certain schemes and situations.
Joe Banyard was signed as an emergency running back towards the end of the season and was placed as a developmental player on the Vikings practice squad. Banyard, 5'-11", 213 pounds is known for his ability to be a speed back and has seen offseason stints with Jacksonville and New Orleans as a rookie out of UTEP. Let's face it Banyard could make the roster as a practice squad player for one more season in hopes to develop him when Gerhart leaves in free agency, but all of this could be a complete mirage.
Jerome Felton was arguably one of the most surprising Vikings in 2012. A key to the Vikings running success with his fierce blocking in front of Adrian Peterson, Felton solidified himself as a Pro Bowl fullback in the NFC last season. He signed a new three-year, $7.5 million deal in March, which included a $2 million bonus and made him one of the NFL's highest-paid fullbacks. There are strict guidelines in the contract and the Vikings have a leash to move in a different direction if Felton doesn't live up to expectations.
Jerodis Williams is an undrafted free agent from Furman University and is merely a player to evaluate for a developmental style player. A 5'11" 185 pound back, Williams is known for his ability to be quick, but agile, especially in the passing game. He will be a name to monitor during training camp.
Bradley Randle is another undrafted rookie from UNLV and is very undersized. Measuring in at 5'7" and 190 pounds, Randle was used in wildcat style formations at UNLV and has experience in a spread style offense. Once again, he is another developmental player who will be monitored by the coaching staff during the early periods of training camp.
Overall, the running back position is solid with one of the best running backs in the game and backups who can fill in and eat up carries when Peterson needs rest.
Pre-Training Camp Projected Running Back Depth Chart
Posted by Daniel House at 9:22 PM