Today on Vikings Corner, we will highlight the top wide receiver prospects that the Vikings may target in the NFL Draft on April 25th. With wide receiver being a definite need, the Vikings will surely address the position with one of their first three picks in the draft.

Patterson was once projected to be the top wide receiving prospect in this year's wide receiver class. The immaturity of Patterson is definitely an area of concern with most NFL teams. Patterson only played one season in Divison I football and was a junior college transfer from Hutchinson Community College. He racked up 46 receptions, 778 yards, and added 5 touchdowns to his 2012 statistics with the Volunteers. His numbers weren't overwhelming, but his size brings an element that impresses many NFL scouts. I'm very concerned about his inexperience with elite competition and feel like he would begin to develop about 2 or 3 years into his NFL career. He showed flashes of raw ability, but was very inconsistent last season. He was one of Tyler Bray's favorite targets at Tennessee, but I'm still concerned. Watching his workouts and Senior Bowl, yielded that he was athletic, but needed some coaching to take his game to the next level. He isn't an immediate game changer and I think there are better prospects to target in the first round.

Here is a video of all his receptions in three SEC games this year:

Allen was initially considered one of the top wide receivers until reports surfaced of a PCL injury that may require surgery. Later we were informed his knee was recovering and he was on his road to recovery. We witnessed his first workout at the California pro-day. Many were concerned with his 40 yard dash time of 4.71 and 4.75 seconds. I question whether this is a key issue for a wide receiver in this league. He has great pass catching ability and was a "reception type" receiver at California. He logged 61 receptions, 737 yards, and 6 touchdowns last season. In his junior season, he actually racked up more receptions (98), more yards (1,343), and remained steady with 6 touchdown catches. The concern I have is the decline in receptions and yardage between last season and his junior season. I love how he is able to get into the endzone, but it could be an underlying stat. I think the main issue I have is his injury problems that have surfaced. Durability is needed at the wide receiver position and I question whether he has the characteristics to play in the NFL.

Hunter is my favorite wide receiver in this draft and he has the talent to be picked in the lower first round of the draft. His stats are eye-popping compared to some of the wide receiver prospects in the draft. He logged  73 receptions, 1,083 yards, and 9 touchdowns. Clearly some of the best statistics in the draft and he is one of the most underrated receivers. I would love for the Vikings to take a hard look at Justin Hunter at either pick 23 or 25. He is most comparable to Sidney Rice in stature and skill ability. Watching some film, I have realized the leaping ability he holds, especially in the corner and middle of the endzone. He is able to reach for the ball at the highest point of trajectory. He is the type of receiver that the Vikings could compliment with Greg Jennings and Jarius Wright and is a long term option for the future. He is my sleeper wide receiver in this year's NFL Draft. 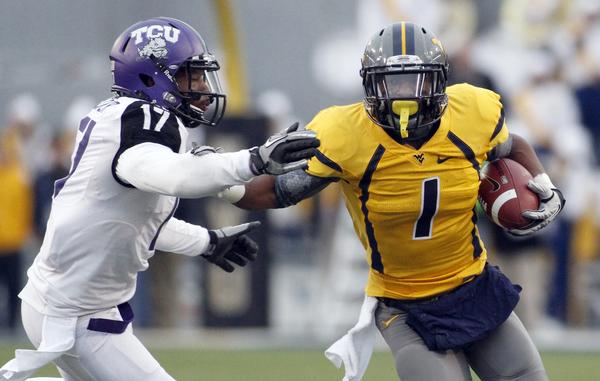 Tavon Austin has been rising up most analysts mock drafts and is as high as pick 6 in my latest Mock Draft. His explosiveness and play making abilities have made him a hot commodity when it comes to wide receivers. His size is definitely the main issue and makes scouts wonder if he can hold up. He is nearly 40-50 pounds lighter than any of the top prospects in the league. To compare, Percy Harvin is listed at 5'11", 184 pounds, which is similar to Tavon Austin. If Austin could bulk up about ten pounds, I think he could survive and could become a dual threat wide receiver. Teams could line him up in the slot and create packages that revolve around his skill set. He brings with him the ability to return kicks and punts and could model his game around the style that Percy Harvin has developed in the NFL.

Robert Woods has had his moments in his college career at USC. His sophomore year, he had a breakout season, recording 111 receptions, 1,292 yards, and a whopping 15 touchdowns. Woods knows how to get into the endzone and continued that trend by recording 11 touchdowns in his final season at USC. We saw a decline in receptions (76) and yardage (846), but he still found his way into the endzone. He is a dominant redzone threat and caught a fair share of his touchdown passes by the goal line. We saw a decline in production last season because of the USC quarterback situation. Matt Barkley was very inconsistent last season and missed the final two games with a seperated shoulder. Woods played through an ankle injury for the majority of the season and we saw a definite decline in production, especially after a week two win over Syracuse. He began to receive less receptions and later became more productive five games after his ankle injury. Woods is a prospect that could be a first round pick, but teams are leery because of his drop in production last season. I think with an established quarterback he can become an elite wide receiver. I've watched five of his games from last season and you witness the amount of balls left short or long by the quarterback. Woods was never put in a great position to be successful last season. I look for Woods to be selected in upper portion of the second round and he could crawl his way into the lower edition of the first round. George Stewart spent extra time with Woods at his pro day and the Viking have a history of selecting USC and Notre Dame players. Woods is definitive option for the Vikings and is a name that could be called by the Vikings in this year's draft.


Overall, these are the five prospects that amuse me the most and are people that I could see the Vikings selecting. There are concerns with several that I have mentioned, but only time will tell whether or not they are going to fit in the NFL. The Vikings have more interactions with the players and see them from a organizational standpoint. We must believe that through private workouts and interviews, the Vikings will know the decision they make is the one that fits the organization the best.
Posted by Daniel House at 10:00 AM