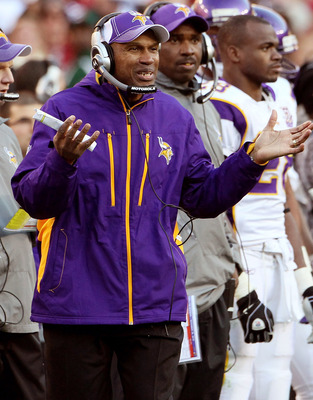 As a dedicated Vikings fan I feel it is time to sit down and reflect on what has been a putrid few weeks for Vikings fans. Frustration is high and with that brings fans who question many decisions made by our favorite team. Yes, I am very frustrated and the time has come to vent some of the concerns I have. I'm a fan through and through and I don't want readers to think I'm bashing the team over two terrible losses. I want to see the best out of our football team and I'm getting tired of the same quotes after every game.

I love Coach Frazier as a person, but I question his ability to lead a team. After every loss we hear the same broken record, "We just have to take some time to look at the film." We hear this statement after every loss and it is getting to the point of annoying. If we were sufficiently watching film we would be able to fix the mistakes that are haunting us. Our offense is terrible and that all boils down to the man in charge, offensive coordinator Bill Musgrave. The offensive playbook was great for the first four weeks, but now we are so puny on every offensive series. I ask the question, do we have a three step drop passing play in our offense? In defense of Christian Ponder, he can't get into a rhythm with the "vanilla" routes and plays being executed by the coaching staff.

I'm not ready to let Christian Ponder off the hook because we are beginning to see a trend from last season. Ponder was amazingly effective in his first 4 games in relief of Donovan McNabb, but could hardly move the offense across the fifty. In addition, he was telegraphing passes and was throwing interceptions on a consistent basis. Sounds familiar to this season and was something we hoped to see improve this season. It is hard to watch the Vikings lose to three rookie quarterbacks in RGIII, Andrew Luck, and Russell Wilson because they look better as rookies than Ponder does in his second season.

Now, the real question is whether or not the coaching staff or Ponder's play are to blame. Should the Vikings bench Ponder to get a clearer look at whether or not it is the playcalling or Ponder's anemic play? I think it is time, but I'm not giving up on Christian Ponder. Sometimes a quarterback needs more time to develop and to reflect on the problem at hand. Let's face it, Joe Webb is not the option for the Vikings in the long term. Ponder was meant to be the franchise quarterback and played like one in the first 4 weeks of this season. He had one of the best completion percentages in the league and didn't commit a interception until week 5. Now he is producing back to back 58 and 63 yard performances. I just can't put my finger on the issue that Ponder is facing. You don't just go from an elite level quarterback to terrible overnight.

It all is just so frustrating especially when we have a great defense and one of the best running backs in the NFL in Adrian Peterson. To defend our defense, they have been on the field for most of the game and have been getting wore down in the late ventures of the game. We were winning games when we controlled time of possession and the offense was able to control the ball more frequently.

Percy Harvin is a beast and played through an ankle sprain in three places during yesterday's game. I never have questioned his toughness and like his tenacity. When things are going well he doesn't accept Frazier's nonchalant "no big deal" facial expression. He wants an answer and wants to win football games.

I wonder when more veterans like Antoine Winfield and Jared Allen will address the team in frustration. Don't be surprised if this doesn't happen before the "must win" game vs. Detroit on Sunday. The last time Winfield spoke to the team after the Colts loss, he willed the team to a win over the San Francisco 49ers. The Vikings need some sort of an injection in the form of veteran leadership. Players like Winfield and Allen are getting old and only have so many more chances to reach the ultimate mission of the Lombardi Trophy.

I wonder if the Vikings are satisfied by missing the playoffs in an attempt to develop Ponder. I get this impression, but I hope I am very wrong in this thought. I understand we weren't expected to play well, but we have more pieces than we first thought. It all revolves around the quarterback and playcalling and we have neither right now. These are two huge keys in winning football games in this league. I just want an answer in the form of a victory next Sunday or a change in gameplan or quarterbacks. Ponder needs to regroup, get his feet underneath him and get back to the basics. The fundamentals aren't there and the only way those will get better is with more repetitions in practice as a backup. Sometimes quarterbacks need a motivation to figure out the problem and I think this would be the perfect way to send Ponder a message that this type of play won't be acceptable.

Don't get me wrong, I'm as true of a fan as any, but I want to win games. Let's work hard this week put together a great gameplan and come back strong, even if it feels like we are 1 million miles away from positivity.
Posted by Daniel House at 6:22 PM