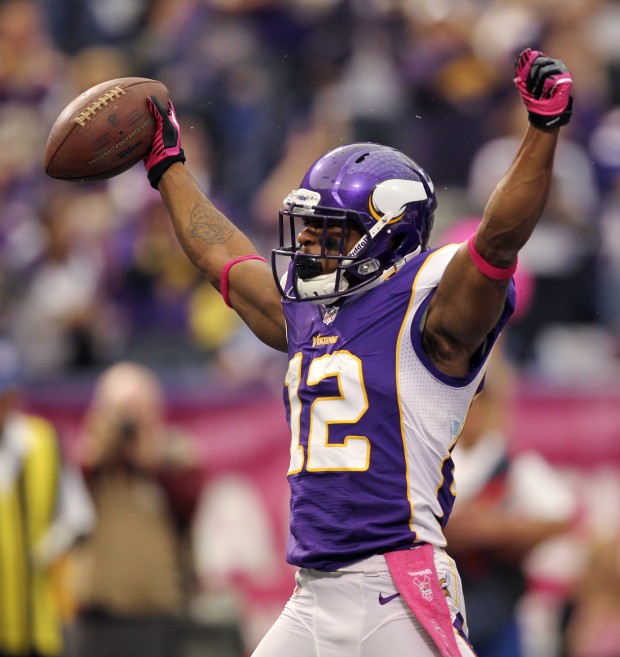 Today on Vikings Corner we will analyze the Vikings 30-7 win over the Tennessee Titans. The Vikings offense started the game off strong, as Percy Harvin ran into endzone on a 4 yard touchdown plunge. Harvin ran with a full head of steam and took three very hard hits on his way to the endzone. Earlier in the drive, Ponder targeted Harvin on a fade over a soft Cover-2. Harvin made a great catch and put the Vikings in the redzone for the first time of the game. The defense also forced a fumble early in the contest when the ball was stripped and Harrison Smith made a great recovery. This all happened before Smith was involved in a scrum over a fumble recovery. In the light of the moment, Smith shoved an official out of his way so he could help remove players from the top of the pile. This resulted in an immediate ejection and potentially a large fine from the league office.

In the late second quarter, Titans quarterback Matt Hasselbeck hit Antoine Winfield in the chest for an interception which resulted in a 42-yard Blair Walsh field goal. The Vikings' next drive covered 77 yards in 12 plays, and Walsh hit from 36 yards to make it 13-0 with 1:52 left in the half. The Vikings had many opportunities to get into the endzone, but the Titans defense stood strong and forced the Vikings to kick field goals. The Vikings defense went into halftime pitching a shutout of the Titans offense. Christian Ponder and the Vikings offense went three and out on the first possession, but the Vikings defense came up with a three and out and kept the shutout in tact.

The Vikings looked to get a drive going, as they went on a 12 play 69 yard drive, which resulted in a 26 yard Blair Walsh field goal. Once again the Vikings offense couldn't get into the endzone and settled for a field goal. The Vikings got the ball off a three and out and put together a great drive totaling 6 plays accumulating 61 yards, which resulted in a 10 yard Christian Ponder touchdown pass to Percy Harvin. Harvin broke four Titans tackles and bounced into the endzone, completing a sensational touchdown. Harvin is by far the leader of this team and with a continued level of intensity, he could be a candidate for the league MVP award.

The Vikings defense dropped into "Prevent" and allowed the Titans to score on a ten yard strike from Hasselback to Jared Cook. The Vikings quickly answered with a Christian Ponder 15 yard touchdown strike to tight end Kyle Rudolph. Rudolph made a sensational catch in traffic extending the Vikings lead to 30-7; putting the game away for good. Titans head coach Mike Munchak evidently believed that the Titans were going to score 23 points in 2 minutes, as the Vikings began to set up in victory formation and the Titans called timeouts in an attempt to receive the ball. The Titans stalled and completed three slant passes and the Vikings stopped the heroics on 4th and 1, which completed a great team victory.

Overall, I like the direction this team is heading towards and the leadership they have displayed over the first 5 weeks of the season. The Vikings easily could have been 5-0 with some luck in Indianapolis in week 2. Coach Frazier issued the Vikings their first "Victory Monday" which gave them a day off to rest and heal. The Vikings need time to rest and recover in preparation for Robert Griffin III, who may not play after suffering a concussion this week. The Vikings will be tested in the next few weeks, as Arizona and Tampa Bay will be arriving at Mall of America Field to take on the Vikings all within a five day span. The future of this team will be dictated in the next few weeks and it will be interesting to see the Vikings preparation for the road ahead. If the Vikings continue to play great defense, they can compete with any team in the league on any given Sunday.
Posted by Daniel House at 11:49 AM