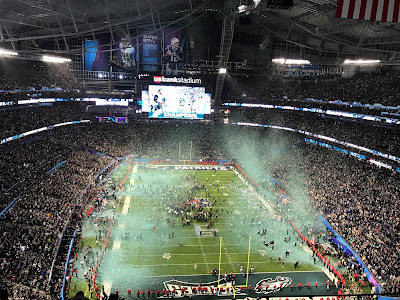 An NFL record 1,151 total yards and just one punt led up to the final minutes of Super Bowl 52 in Minneapolis. The ball was in New England Patriots quarterback Tom Brady’s hand with 2:11 left to write another script in the Patriots’ legacy. Football fans across the globe had watched this movie before.

Philadelphia had yet to reach Brady the entire night, but it happened in the most critical moment possible. Eagles defensive lineman Brandon Graham made one of the single biggest plays in the history of Philadelphia football. The young defensive end reached around Brady, knocking the ball out of his grasp as fellow teammate Derek Barnett recovered the football. It would cement a victory as Philadelphia won their first Super Bowl in franchise history.

“We knew that we were going to have an opportunity where [Brady] was going to have to hold the ball,” Graham said following the Eagles’ win. “I’m just grateful I made the play when it came my way.”

On a night where football fans witnessed the most total yards in a single NFL game, the Eagles’ fourth-and-short conversion proved to be one of the most pivotal plays in head coach Doug Pederson’s career. A two-yard pass to tight end Zach Ertz set up the eventual game-winning 11-yard touchdown from Foles to Ertz. The tight end reached across the goal line as Eagles fans erupted with joy at U.S. Bank Stadium in Minneapolis.

Quarterback Nick Foles completed 28 of his 43 passes for 373 yards, three touchdowns and one interception. He also was on the receiving end of a reverse pass play in the first quarter. It was one of many tricks on display during a wild offensive explosion. By executing the play, Foles became the first player to throw and catch a touchdown pass in the Super Bowl.

Head coach Doug Pederson said the team had been working on the play for a few weeks prior to running it in the Super Bowl.

“That play, we’ve been working on for the last couple weeks,” Pederson said. “The guys executed it beautifully.”

Foles was in a groove early and extended plays with his pocket presence. The Eagles blended play-action into the gameplan, helping their targets get open against New England’s mix of zone defense. Foles targeted the running backs out of the backfield to exploit a favorable matchup against the Patriots' linebackers. Running back Corey Clement had four catches for 100 yards and a touchdown, including a key 22-yard score in the final minutes. He was someone Foles looked for all night.

Foles, the Super Bowl MVP, said he once considered retiring before the season, but the decision to stick around was one he’ll never regret.

“That was a moment in my life where I thought about [retiring],” Foles said. “I’m grateful I made the decision to come back and play.”

He managed to put together an unforgettable performance because of his protection. The Eagles’ offensive line didn’t allow a sack the entire night and dominated the trenches. New England’s non-existent pass rush created opportunities for Foles to push the ball downfield. His favorite target, Alshon Jeffery had three catches for 73 yards, including a first quarter 34-yard contested grab in the back right corner of the end zone. The blend of downfield passes and explosive plays were a theme for both teams. Neither team had an answer for each other’s schemes as timely wheel routes, screens and deep passes into zone coverage created fireworks on the field. The Patriots and Eagles traded scoring drives the entire first half as the Patriots used explosive plays of 50, 46 and 43 yards to keep the Eagles’ defense on their toes. However, New England had just 12 points to show for it in the first half.

“We had opportunities I thought to take control and we didn’t,” quarterback Tom Brady said. "Credit to the Eagles."

The Patriots scored touchdowns on all of their scoring drives until the final strip-sack put an end to their season. Quarterback Tom Brady found Rob Gronkowski four times for 68 yards to open the second half, fueling an 8-play scoring drive over 2:45. In the final minutes, New England had the ball, but couldn’t make one final play to continue building their dynasty.

“We just had to make more plays down the stretch and they did a good job,” Patriots tight end Rob Gronkowski said. “They just made more plays.”

In the end, Philadelphia overcame the loss of Carson Wentz and countless other players, including veteran tackle Jason Peters. They managed to insert Nick Foles and ran through the NFC to bring home a championship to Philadelphia.

“Our fans have been waiting a long time for this,” Eagles head coach Doug Pederson said. “I just can’t wait to get back there and celebrate with our fans.”

As the NFL season comes to a close, Philadelphia’s new hero and MVP will return home with a team full of champions. Nick Foles held the Lombardi Trophy in his hands and looked into his young daughter’s eyes. For Foles, it was hard not to think about how much has really happened over the past three months.

“We are Super Bowl champs,” Foles said. “But time does stop when you look into your daughter’s eyes and get to celebrate this moment.”

From a veteran mulling retirement, to a backup, and replacement for an injured star, quarterback Nick Foles completed an improbable Super Bowl moment in a game for the ages.
Posted by Daniel House at 11:00 PM